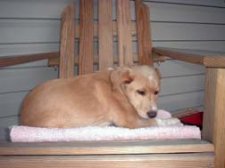 Troy, who was first named Charlie, became known to BYC when we received a call about a puppy who had been run over by a four-wheeler. As a result of the accident, Troy had a broken leg and was in danger of being shot. At this time, he was only 10 weeks old and weighed about 30 pounds.

When he came to BYC, he had a bandage on his front leg from a wound and would not bear weight on his left hind leg. The veterinarian said that he was in a lot of pain and the left hind leg would have to be pinned to heal correctly. So once again, the word went out - can we afford treatment for Troy - treatment that could go upwards of $1000? Our Franklin Fund had been somewhat depleted by recent serious injuries, but we could only hope to raise the rest of the money needed. And so - Troy was scheduled for surgery the following day and Rachel, a BYC Board member, agreed to foster him during his recuperation.

Two days later, Rachel, accompanied by her 3-year-old daughter, picked Troy up from the veterinarians and brought him home. There was an incredible bonding between this little girl and the injured puppy. She would comfort him saying "shhhh I am here. It will be O.K." and he would fall asleep in her lap.

At Troy's first postoperative checkup, the vet said he was healing very fast. His stitches were taken out, but he was feeling irritation from the pins in his little leg. He would need to return to the vet in a few weeks to have those pins removed once his leg was fully healed. Rachel was given antibiotics for him and instructions on stretching exercises he would need. And so he began to settle in and act more like a puppy - carrying around shoes and baby toys. Troy's favorite sleeping place was on the couch or chairs where he could be like people.

Once given the OK, Troy went on his first "real" walk. He so enjoyed that walk, not wanting to go slowly but to hurry along checking out all the puddles, flowers and anything else within his reach. He was soon up to 3 walks a day and full of energy.

Just Look at Me Now!