Due to COVID-19, our adoption center is closed to visitors. However, we are still doing adoptions by appointment for people with approved applications. To see the dogs and cats available or to submit an application, go to "Adopt." 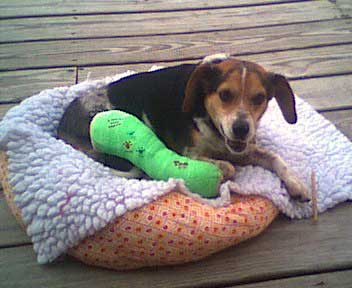 Franklin, the first pet to benefit from a large, dedicated funding effort, hence the name, the Franklin Fund.

Because You Care's Franklin Fund supports severely injured or ill animals who have been abandoned and who are in need of in-depth medical care in order to survive. These animals are loving, kind beings who have had misfortune visit their doorstep. Because of the depth of their needs, most shelters would automatically euthanize these animals. The Because You Care Franklin Fund offers them hope by providing funding that allows them to receive the veterinary care that they need.

This Fund exists because of many people - donors, volunteers, and veterinarians who offer discounts for their services to keep costs as low as possible. Please consider helping by mailing in a donation, volunteering as a foster home, or spreading the word about what BYC is all about.

Franklin is a two-year-old beagle found by the side of the road after being hit by a car. A guardian angel found Franklin and called You Care. Franklin was then taken to Camboro Veterinary Hospital for examination where it was found that he had two broken back legs and a broken pelvis. Franklin's fate was now in the hands of the volunteers of BYC. Many, many e-mails went back and forth while members struggled to make a responsible decision for Franklin - did the organization have the funds to pay for the extensive surgery needed to allow him to live? What would be his quality of life?

The person who had found Franklin was able to raise $200 toward his vet care - with estimates now topping $1400. Assurances were given that the surgery would mend his legs and he could live to a ripe old age - that was all BYC needed to hear! Surgery was performed and now he is in the first stages of what will be a long recovery in his new foster home. Franklin will need care for even his most basic needs and pain medication for the next several weeks. He has pins in both back legs with one leg having pins on the outside and the inside. It is expected that his broken pelvis will heal well if he is kept very quiet.

Franklin was very tired. He was placed in his own cage with very soft padding. Even though he was on very strong pain medication, Franklin still had a good appetite. If you look carefully, you can see the pin in his rear leg. Finally, he had to give in to sleep and was covered up to keep warm where he could dream of the day when he would walk again like other dogs. 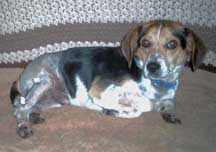 Franklin's first trip back to the vet went well. Dr. Randy Sliker said that his bones are mending nicely but that he must still be kept quiet with little movement. We were able to move him to a larger crate and Franklin may begin to bear weight slightly. Hopefully, after the next appointment, he will be able to move to a larger pen and be less confined.

While Franklin still has a very long recuperation, he is making progress. He is eating and drinking and needs less pain medication. He will not be able to use his back legs for some time, but a special harness is on in order to help him walk. BYC volunteers and Franklin say thank you to those who helped Franklin get the care he needs so that his future looks bright.

Dr. Sliker is the veterinarian who operated on Franklin in order to give him a chance when many opinions expressed were that he was too injured to survive. Franklin survived in part because of Dr. Sliker's willingness to try and because of his expertise as a surgeon. Thank you, Dr. Sliker! 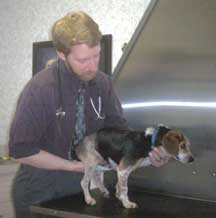 Here is Franklin - now one month following his surgery. Dr. Sliker is very pleased with his progress and the care that the BYC foster home has been giving him. He said that Franklin is healing right on schedule. Franklin will be returning in another two weeks to have his external pins removed. This should be a fairly easy procedure with just a little anesthesia.

In the meantime, Franklin is now allowed to roam for brief periods. Sometimes returning to his couch potato status is okay, but Franklin needs to begin exercising those legs and muscles that he has not used in quite some time. He tires easily but is in routine training to build his endurance back to where it should be. BYC members have taken turns providing the critical care that he needs and are gratified to see his progress. 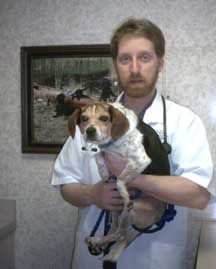 Franklin had the external pin removed from his back leg and while he was under, Dr. Sliker felt he had gained sufficient strength to be neutered as well. Once he came home from surgery, he was allowed to sleep a lot and was given pain medication, not to mention a lot of tender loving care and favorite snacks! At this point, Franklin's appetite is back and he is becoming acquainted with the other dogs in his foster home and his new foster mom, Rebecca.

It just could be that Franklin is the most spoiled dog in Erie. Even though he is very slow getting around without the support of the outer pin, he has found his favorite spot on the sofa, his place in the family bed and has decided that he likes the kennel belonging to one of the other dogs better than his own and has moved right in! Sometimes Franklin becomes so happy that his wagging tail causes him to topple over.

Franklin has had a set-back. After having the final pin removed and starting to walk without support in that leg, the leg broke again. Rebecca heard him give a cry of pain, and upon taking him to the emergency clinic, the vet found that the bone had indeed broken again. He was sent home with a splint and more pain medication.

Rebecca was horrified that this should happen after he had been through so much! The bone had not quite healed and was not as strong as it was thought. So now, dear Franklin has to have a cast for six weeks. He quickly discovered how to maneuver with the cast so that he could lay down and have his belly rubbed and stretch his other three legs. 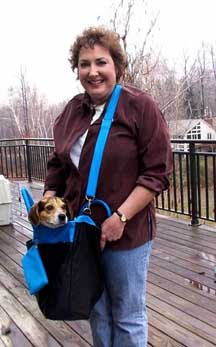 After his long recovery, Franklin is finally healed and ready for adoption. Two wonderful long-time friends of Because You Care welcomed Franklin into their home where he lives happily today.

Thank you to everyone who helped make Franklin's recovery possible! His story gave birth to the Franklin Fund, allowing many more animals like him to be rescued and rehabilitated.