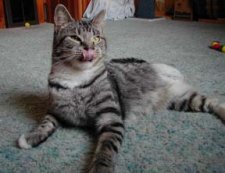 Buddies through Pain and Recovery

Shawn and Grant came to Because You Care at about the same time. Both had suffered serious injuries. Grant (pictured right) had been seen around a home in Union City with a severely injured leg and tail. Both had the awful odor of infection. Grant would come and go from the porch of a house until finally, the owner was able to get him. Under the direction of Because You Care, this person took him immediately to the Pet Emergency Center. The first line of treatment was to test for feline leukemia and feline immunodeficiency virus (FIV). After the tests showed Grant negative for both diseases, the Emergency Center went about trying to stabilize him and gave him medication for pain until he could be transferred to Twinbrook Veterinary Hospital early Monday morning. The prognosis was not good - he would lose part of his beautiful tail and his leg could not be saved.

One of the long-term BYC foster homes agreed to take Grant from the emergency center where Dr. Kester was able to evaluate him and agreed that indeed, he would lose his back left leg and tail. And so began the journey to save Grant's life, preventing the spread of infection and discontinuing what must have been unbearable pain. About two days later, Ruth, his new foster mom, picked Grant up from the vet's and took him home. Grant was recovering, at least physically. His coat began to grow back over the site of the surgery and he began to learn to walk on three legs. Psychologically, however, he was frightened and rarely allowed himself to be picked up. We saw small steps toward trust but knew it will take a little while. Grant, a beautiful chocolate point with wonderful long hair, needed time for his soul to heal.

ShawnShawn's story is very similar. He had been seen in a neighborhood, but before he could be rescued, he was severely injured and immediately taken to Erie Animal Hospital. The woman who brought him in told the office staff that she had been speaking with someone who was supposed to come and get him, but now he was injured and needed immediate help. And so, Erie Animal called BYC. Luckily, Shawn also tested negative for feline leukemia and FIV. Shawn's injuries were evaluated by the veterinarian at Erie Animal. His only chance was to have his injured leg amputated! How could this happen? Another beautiful cat needing to lose a leg due to life-threatening injury! Two cats having major surgery in one week is quite expensive - but there was no other choice. Of course, Ruth said that as long as she had one cat with only three legs, she might as well have two. Shawn, unlike Grant, still has complete trust in people. He purred and rubbed, though a little awkwardly on his three legs.

Without the Franklin Fund, Shawn and Grant may not have had a chance to continue living, if only with 3 legs. One always wonders what terrible things must have happened to these beautiful animals befriended by BYC. For these two cats, the rescue was the only avenue available to save their lives.