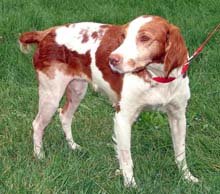 As I stood in the veterinary hospital in front of the cage she was being confined in, I felt pity for the thin, ragged looking Brittany. I opened the door and she stumbled into my arms and pushed her head into my shoulder, asking without words to be hugged. I lost my heart to her as I complied and as I wrapped my arms around her, she trembled and pushed into me harder, asking for more.

Knowing what pain she had been in for the past three days, it made me feel better knowing that later that afternoon she would have the surgery she needed to fix her badly broken back leg. She was going to require a plate to bring the bone fragments back together to allow the leg to heal.

The accident occurred several days prior to my visit to meet her. A kind person saw her get hit by a car and immediately took her to the nearest vet. From there, the woman called BYC and asked for help for this stray dog. One back leg had a compound fracture and the other was dislocated at the hip. I told her that BYC would finance the vet care needed to stabilize the dog while we attempted to locate her owner. After three days of maintaining her on pain medication, nobody had called to claim this darling dog so surgery was scheduled to plate the broken leg. I left the vet hospital that day with my stomach in a knot, waiting for the phone call that would tell me how the surgery went.

The call came that evening, telling me that the surgery had gone well, the plate was in place and she was resting in her cage again. A few days later, the news was not so good. The hip that had been dislocated had repeatedly slipped back out place and now needed surgery to repair it so that it would not slip out again. Worse yet, this girl had apparently struggled in her cage overnight and had somehow managed to bend the plate that had been used to repair the broken leg. I was devastated! We had to decide whether to put more money into her or have her euthanized.

I contacted other board members and none of us could bear the thought of losing this sweet girl that had trembled in my arms after having gone through so much. She had come to us thin, dirty, and badly injured and entrusted herself to our care. We rationalized our decision by saying that we didn’t want to throw away the large amount of money that had already been invested in her, but we were really listening to our hearts telling us that we couldn’t put a price on her life. The surgery was done that day and both back legs were repaired. Two days later she went to her foster home, the woman who had taken her to the vet after she was hit by the car.

The foster home named her Gracie, a name that fits her sweet, loving personality. Thinking that her trauma was over, we all relaxed and waited for her to heal. However, about a week after her second surgery, the foster home found that she had chewed off her cast and took her back to the vet. You can imagine our horror to find out that she had bent the plate in her leg a second time! The vets that had done the first two surgeries were just as horrified as we were, and we considered amputating the leg. The vets were very opposed to that since they had worked so hard to save the leg, and agreed to do the third surgery at an incredibly low cost. The leg was plated once again with a very heavy-duty metal plate and Gracie went back to the foster home several days later. We are now holding our breath while she struggles to recover from the third surgery and look forward to the day she can be adopted by a loving home.

We have every reason to believe that Gracie will now fully recover from her horrible ordeal and BYC needs to recover from the cost of the three surgeries needed to save her life.

Your contribution to The Franklin Fund will help pay for Gracie’s surgery and for other seriously injured animals. You can make a donation online or by sending a check to Because You Care, Inc., PO Box 54, McKean, PA 16426. With your help, BYC can continue to save the lives of animals that will otherwise have to be euthanized due to lack of funds.