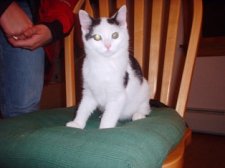 In August of 2004, we were traveling North on I-79. There was a lot of traffic that Friday afternoon when a man ran across two lanes of traffic, scooping up on his way what looked like a little ball of fur. We only got a quick glance as he ran back across the interstate. Coming to stop a few yards away, we realized he had picked up a small kitten. He told us the kitten was barely alive and didn't know what to do. We offered to take him to the local pet hospital.

This kitten was so small and so frail that he looked almost "nonexistent." You could see his ribs with every breath he took. From his cries, you could tell he was in immense pain. He had a fresh deep wound on his rear leg and then we realized that his back legs wouldn't move. Pulling into Camboro's parking lot, we rushed him inside where they found that both back legs were broken and possibly his back. At that point, a big decision was needed. We did not have the money to pay for his complete treatment but paid what we could for them to do everything possible to save the kitten's life. In the meantime, we contacted Because You Care in hope there were funds available through the Franklin Fund in order to help this little guy.

The veterinarian was not optimistic about his survival but we felt he needed to be given a chance. He seemed like he was a fighter and wanted to live. They went ahead and sutured his back leg, did x-rays and gave him medication to lessen the pain. Luckily his back was not broken, but he would need surgery on both back legs. It was also discovered that all this poor kitten had in his belly were bone fragments and tiny rocks. He was not strong enough to withstand surgery for a few more days, and each night we said a prayer that he would wake up to see the next day. We visited him and tried to reassure him that everything would be ok and he would be safe.

Finally, after three days, he was strong enough for the surgery, although still, the outlook for a full recovery was bleak. A pin was put in one thigh and wired around his opposite shin in an attempt to hold the bones together while they healed. He made it through the surgery but still needed to stay at the vet for further recovery. About a week after the surgery, he came to live with us as our foster pet. He loved to snuggle with me and loved his two other kitty playmates (adopted through BYC a few months earlier). They were helpful in his recovery encouraging him to start playing.

"Crash" as he has been named, is now able to jump, play and run - he is a survivor and he has recovered much more than expected. What made that man run across the highway to pick up a little kitten we will never know, but we will always be eternally grateful. Thank you to all who contributed to the Franklin Fund for you helped save this kitten's life. Crash has snuggled his way into our hearts and we are looking forward to his being with us for a long time to come.