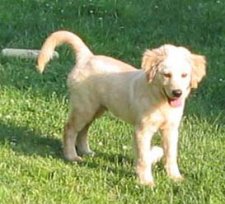 Cooper, a golden retriever, was rescued as a 10-week old puppy by the brother of a BYC member. When the brother saw a puppy get hit by a car and inquired of a nearby family, he learned that two puppies had been dumped from a vehicle. One puppy was able to run away; unfortunately, Cooper could not get out of the way fast enough to avoid the wheels of an oncoming car. The rescuer gathered him and immediately contacted BYC. Cooper was soon taken to the Pet Emergency Clinic for diagnosis and evaluation of his injuries.

At the Pet Emergency Clinic, x-rays revealed a badly fractured pelvis and there was a bad cut on Cooper's front leg. Now, BYC needed to decide if they could afford to take on this new responsibility and save this darling puppy. After discussion among the officers and board, it was decided that BYC would indeed help him - what else could they do? The funds for his potentially costly treatment would come from somewhere but right now he needed BYC. While in the waiting room of the Emergency Center, two other pet owners immediately donated $50 each to help Cooper. And so, he was taken from the emergency clinic to be nursed overnight by our member who gives "intensive care" to pets in need and he was transported to Camboro the following day for further evaluation.

Camboro veterinarians, after examining Cooper, said that his pelvis was fractured in 3 places, his knee was damaged and he had a cut on his leg. For such a young dog, he had serious injuries. While he might heal without surgery, it was unknown whether or not Cooper would have problems with his pelvis in the future. He would need 3 weeks of strict confinement (so hard for a puppy). It broke our hearts to see how brave this little boy was. For all the pain he endured, he still wagged his tail when he heard a voice.

A short time later, after evaluating Coopers, situation, good news arrived! Surgery was not necessary. Cooper still needed several weeks of strict confinement – but that was better than undergoing surgery. And the best news came almost at the same time - after Cooper had fully recovered, he had a new loving forever home! In the picture to the right, Cooper is still recovering quietly in his crate with bandages on his leg and TweetyBird by his side.

Here is Cooper - almost fully recovered and in his new home! He is very lucky that the Franklin Fund was there to help.