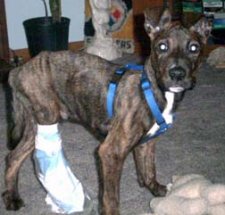 Artemus came to BYC when he was only about 13 weeks old and weighed 16 pounds with hips and ribs sticking out everywhere. He had such a sweet personality but hadn't received even the most basic vet care a puppy needs. One day he was brought into a groomer's by a person who said he had been adopted from a shelter and their child had fallen on the leg and broken it. The family did take him to a veterinarian who put his leg in a cast but complications arose when the cast slipped. It was several weeks before Artemus would be taken to the vet again, and by that time, the leg was so bad that the veterinarian thought there was no choice but to amputate. With no additional money for more medical bills, he wasn't wanted any longer, and the groomer was kind enough to take him. Not knowing what else to do, they called Because You Care.

Luckily, BYC had a foster home available at that time, and so Artemus became a foster puppy. With a visit to the veterinarian, we found the situation to be worse than we had realized. The injury was healing incorrectly, causing a great deal of pain to Artemus and preventing any chance or regaining use of the leg. There was a large open sore where the cast had rubbed Artemus' little leg that had become horribly infected and swollen to twice its normal size. The veterinarian said that the leg needed to be treated before surgery, but then there might be a chance of putting a pin in his leg. However, because his leg had already begun to heal incorrectly, part of the bone would need to be removed first.

Because our potential foster home could not provide the level of care Artemus would need prior to the surgery, Judy, a BYC Board member, agreed to take him and provide the daily wound dressings that he would require. She would have to cut off the cast daily, apply more medication and re-bandage the leg for about a week and a half until he healed sufficiently for surgery.

And so Judy began the treatments Artemus would need to regain use of his leg and Casey, as seen here, did her part to boost Artemus' spirits and give him doggy affection. As the treatments went along, we worried and hoped with each new day. Was there feeling in the toes? When Judy cleaned the dead skin away he didn't show any reaction. Did he have nerve damage? A trip to the vet the next day showed that he did indeed have feeling in those toes; it just took a lot for him to resist his care. He was so emaciated, Judy had to gradually increase his food so he could fill out his little body.

And so for many days, Judy continued the regimen of caring for Artemus - each day getting closer to his surgery which would be the final determination on the future use of his leg. When that day came, the veterinarian put two pins in to hold the bones in place and they would remain there for the next few weeks. Upon doing the surgery, two additional fractures were found that clearly were suspicious in nature and could not have been caused by a simple accident.

Artemus, with care and rehabilitation, gained a lot of weight and began to develop quite a personality. He liked to hoard all of his toys and chew bones and then crash into a long nap during which he snored so all can hear. Today, Artemus is happily healed and enjoying his new life in a loving and caring forever home.